For four decades a cartoonist for magazines, greeting cards, the web and newspapers, delighting readers across America and around the globe.

Cartoons That Will Send Me Straight To Hell 4:
​Deluxe Anniversary Edition

In time for Xmas 2021!
200 new comics and cartoons in high resolution HD for your mobile devices.

Fartoons: Cartoons from the Cloud

My Cartoonist Is Not Funny : from Looks Good On Paper on Gocomics 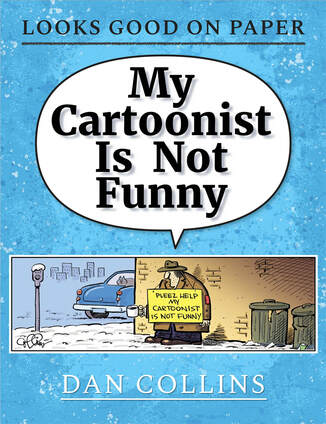 Fresh from the new GoComics.com site is collection number one of Dan's syndicated comic strip Looks Good On Paper. The strip is in it's fifth year, so it's time for the ebook! The first edition was an iBooks ebook created in their iBooks Author program. The Kindle version is now complete and ready for sale right now! Click the Kindle button for the link or just search for Dan Collins on your favorite seller's sites. This is our eleventh ebook here at Fun-E-Books Publishing and number 12 is already in production. The E-book Factory has retooled so look for a selection of fresh new ebooks in the coming months. We're really psyched here at FEB!

​The LGOP series will be a new format of epub, a fixed layout ebook. They keep true to the designer's vision and don't reflow in unpredictable ways when a reader changes fonts and font sizes or flips the orientation of their device. Those are fun ebooks to do, don't get me wrong, but it's nice to get a little stability for a change. They also allow me to add interactive features like a video of me saying 'hi'. That would be a nice touch, don't you think?
Amazon Kindle

Cartoons That Will Send Me Straight To Hell 3 : The Third Coming

Cartoons That Will Send Me Straight To Hell 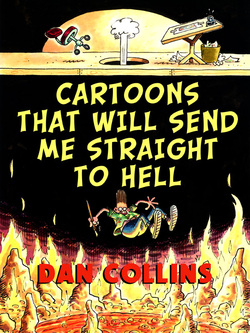 Top 10 Best Seller on Amazon (click to enlarge)
Dan Collins isn't a bad person. He's kind to animals, loves children and helps old ladies across the street. But when he gets a pencil in his hands, he becomes a menace. No subject is too taboo. From dead kittens, to Helen Keller, to organized religion, there's no subject he won't twist. Politically correct? Dan Collins doesn't know the meaning.

You've never seen cartoons like this before. This definitely isn't the Sunday funnies. Hilarious, demented and guaranteed to have you clutching your navel between gasps for air. Once you get hold of this book, you'll be convinced that this guy needs serious help before he's doomed to an eternity in hell.

Check out this collection of insane cartoons and see if you're as demented as Dan Collins. If you find yourself laughing hysterically at some of the most marvelously bent cartoons ever created, plan on joining him on his decent into the inferno.

Sample cartoons from the books.

High resolution images. Click command (+) on your keyboard to enlarge the page enough to view comfortably.

More Cartoons That Will Send Me Straight To Hell

Advanced CSS text styling for a "real book look"
The second in the "Straight To Hell" series of cartoon books by that side-splitting cartoonist Dan Collins continues where the first book left off, and keeps that crazy train barreling down the tracks. If you like your cartoons to come from left field and leave you asking ‚ "Where does this guy come up with this stuff?!"‚ then this ebook should be in your library.

Dan covers all the hot-button topics per usual, such as: politics, religion, aliens, and things people do in dimly lit rooms when they think the authorities aren't watching. He also touches on such assorted subjects as: lawyers, liberals, Lincoln and lost dogs. Not to mention: Mickey Mouse, Moses, meat dresses and Mr. Orgasm. We could go on for the rest of the alphabet, but rest assured that if there is a joke in it, Mr. Collins has probably thought of it.

He's been a professional cartoonist for over 34 years in magazines, newspapers, and greeting cards, creating well more than 12,000 individual pieces of ink-laced hilarity. His work has appeared nationally and around the world in venues of all kinds, both print and on the web.

His work appeals to persons young and old, liberal and conservative, rich or poor, smart or dumb, alien parasite co-opted and normal humanoid. His humor finds the weak point in your funny bone and exploits it for monetary gain and free beer when he can manage. We can safely guarantee that you'll want to buy him a few rounds after reading this book. Cheers!
Amazon Kindle

The weirdest Cartoon E-book ever 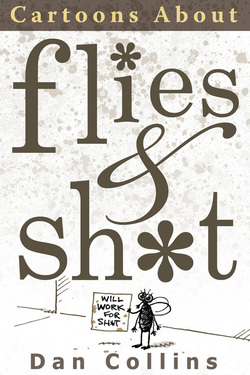 What is it about flies and shit that is so funny that someone would create an entire e-book of cartoons about it? If you knew anything at all about long-time cartoonist Dan Collins, you wouldn't ask that question. He finds his crazy humor in the most unlikely of places. He goes where no cartoonist has gone before; where no cartoonist would go; where no cartoonist should go. He's like the James T. Kirk of cartoons: he doesn't believe in rules and thinks they are made to be broken. He does it his way and somehow succeeds in pulling it off, and then gets away with everything because he's just so gosh darn cute. And also he has a best friend who is sort of green and his ears are kinda weird-looking. Yo, Vinnie!
This e-book contains more than 150 of the funniest cartoons about the most un-funniest of subjects the world has ever known! We dare you, the reader, to not smirk or smile after just one page of this off-the-charts cartoon collection, the fourth self-produced and self-published by Mr. Collins and Fun-E-Books Publishing. We guarantee you that this is some good ... stuff!